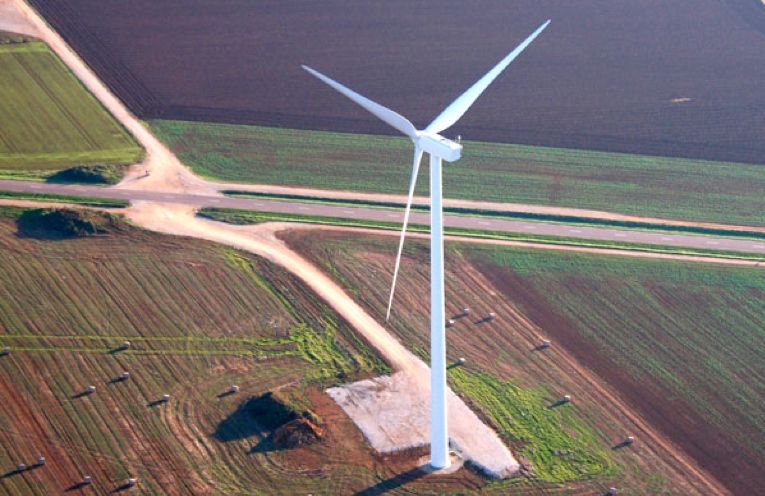 Boralex Inc. (TSX: BLX), a portfolio company of Caisse de dépôt et placement du Québec (CDPQ), has entered into an agreement with Ardian Infrastructure to acquire 100% of the outstanding shares of Kallista Energy Investment SAS, for €129.4 million or CDN $202 million plus the assumption of €94 million or CDN $146.7 million in project debt.

The acquisition will strengthen Boralex’s position as France’s largest independent producer of wind power by increasing its installed capacity from 609 MW to 772 MW.

Boralex recently secured an investment of CDN $200 million by way of an unsecured subordinated loan with CDPQ and Fonds de solidarité FTQ.

CDPQ is the single largest shareholder of Boralex, controlling #SUBSCRIBERS ONLY CONTENT – where and how did you get your news? Subscribe today to see our research on this and all other subscriber ONLY news. Be informed!#

Ardian, formerly AXA Private Equity, is a leading private investment house with assets of US $66 billion managed or advised in Europe, North America and Asia.

Highlights:
• Boralex strengthens its position as France’s largest independent producer of wind power by increasing its installed capacity from 609 MW to 772 MW. Worldwide, Boralex increased its total installed capacity by more than 11%, from 1,456 MW to 1,619 MW.
• Acquisition of 163 MW of wind power projects in operation with a weighted average remaining life of 8 years under contract, a 10 MW ready-to-build project and a portfolio of projects totalling about 158 MW, bringing Boralex’s potential in Europe to nearly 1,000 MW without considering the 152 MW in projects in France set out in the Growth path.
• Total consideration of €129.4 million (C$202 million).
• Boralex expects the transaction to add approximately €23 million (C$36 million) to EBITDA(A) based on the anticipated results of Kallista calculated in accordance with French GAAP.
• Integration into Boralex of the Kallista Energy Investment SAS development team, whose highly specialized expertise in repowering wind power projects can be leveraged immediately.

Montréal, Canada and Lille, France, April 20, 2018 – Boralex Inc. (TSX: BLX) (“Boralex”) is pleased to announce that it has entered into a purchase agreement with Ardian Infrastructure to acquire 100% of the outstanding shares of Kallista Energy Investment SAS (“Kallista”), for a consideration of €129.4 million (C$202 million) and the assumption of €94 million (C$146.7 million) in project debt.

The consideration will be paid by Boralex from its recently enhanced revolving credit facility. Boralex anticipates an increase in discretionary cash flow per share following the transaction.

In the medium term, the integration of Kallista’s assets should enable development and operations team synergies. In the longer term, given Boralex’s presence in France for nearly 20 years, the number of development projects completed or in the process of completion, and its dynamic team, Boralex will have the strength it needs to exert greater influence with the various stakeholders and take full advantage of its leadership role.

Boralex President and CEO Patrick Lemaire applauded the deal: “This transaction is very strategic and beneficial for Boralex and will strengthen our position as France’s largest independent producer of onshore wind power and allow us to take full advantage of our unique and integrated model as developer, prime contractor and operator of our projects. Boralex will enjoy a number of operational synergies and significantly improve its growth prospects in light of the very ambitious renewable energy development goals set by the French government.”

“Since 2003, Boralex has had a pioneering vision in France developing its wind power operations,” said Patrick Decostre, Vice-President and General Manager of Boralex Europe. “The major acquisition announced today is a hallmark of steady, well-controlled growth. It shows that with the agility of a company on a human scale like ours, along with our financial strength, we have become a leading player in the current market consolidation as France’s largest independent producer of onshore wind power.”

Each of the projects under construction or under development may benefit either from a known and predictable rate under an existing feed-in premium scheme or, once all licences are obtained, be submitted under the open-window scheme or future requests for proposals.

The transaction is expected to close in or around late June 2018, once regulatory approvals and other customary closing conditions have been met. An adjustment mechanism has been provided to confirm the consideration payable at closing.

The following map shows the locations of the projects acquired and Boralex’s geographic coverage in France once the transaction is completed. 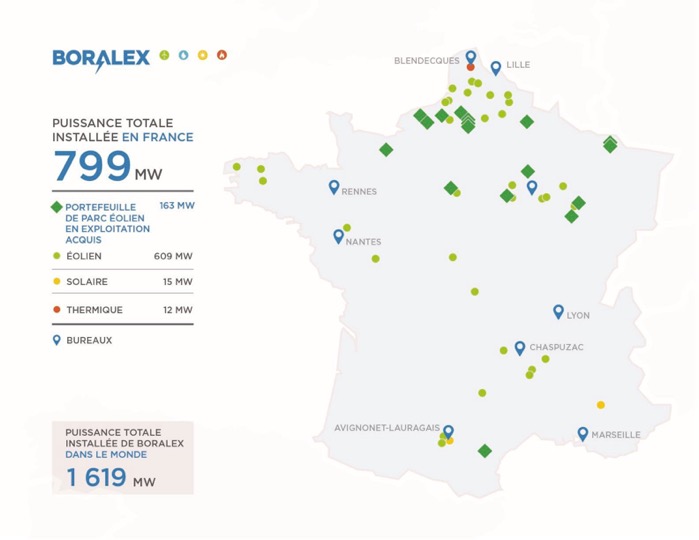 With the portfolio of acquired projects, Boralex’s new installed capacity will be 1,619 MW, including nearly 800 MW in France, representing an increase of over 11% worldwide. Considering this announcement and the projects already under development in France and the United Kingdom, Boralex will have a portfolio of potential projects totalling approximately 1,000 MW in Europe alone.

Messier Maris & Associés served as financial advisors and New York- and Paris‑based K&L Gates served as legal advisors to Boralex in connection with the transaction.

Boralex develops, builds and operates renewable energy power facilities in Canada, France, the United Kingdom and the United States. A leader in the Canadian market and France’s largest independent producer of onshore wind power, the Corporation is recognized for its solid experience in optimizing its asset base in four power generation types — wind, hydroelectric, thermal and solar. Boralex ensures sustained growth by leveraging the expertise and diversification developed over the past 25 years. Boralex’s shares and convertible debentures are listed on the Toronto Stock Exchange under the ticker symbols BLX and BLX.DB.A, respectively. More information is available at www.boralex.com or www.sedar.com. Follow us on Facebook, LinkedIn and Twitter.