By: Ted Liu
In: PE Funds 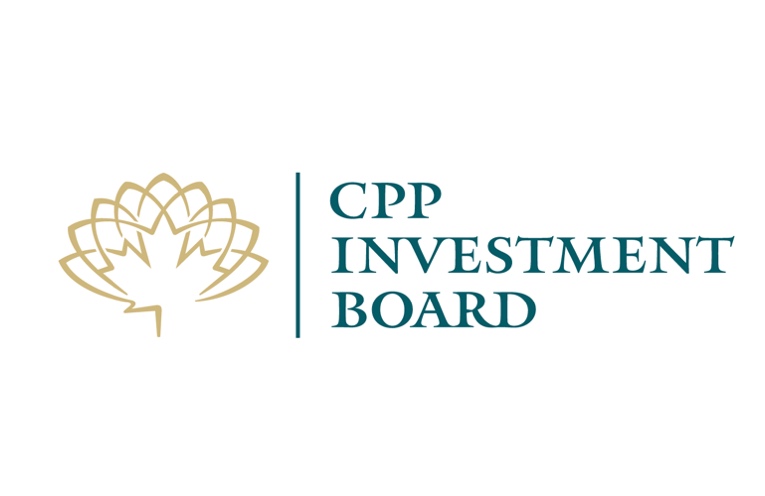 Private equity (PE) leads all returns, in particular, Emerging PE and Foreign PE leading with 19.5% and 16% respectively. In comparison, Canadian PE return is a dismal 1.8%, ranking as the bottom third just above marketable government bonds (1.6%) and other real assets (-9.8%).

“The Fund reached a new high of $356.1 billion at the end of our fiscal year due to continued strong equity markets,” said Mark Machin, President & Chief Executive Officer, Canada Pension Plan Investment Board (CPPIB). “Soaring public equity markets through the first nine months of the fiscal year were the primary source of growth. As volatility returned during the fourth quarter, our private holdings proved resilient, adding significant value.”

In fiscal 2018, CPPIB continued to prudently execute its long-term investment strategy of seeking value-building growth while also diversifying the CPP Fund across multiple geographies and asset classes. All of CPPIB’s investment departments provided positive returns in the fiscal year.

“Our investment teams continue to execute on diversification,” added Mr. Machin. “Our investment framework actively seeks to manage risk, maintain balance and help contribute to the sustainability of the CPP itself. While we don’t expect every investment department to produce gains in any given year by design, all our departments made strong contributions this fiscal year.”

In the five-year period up to and including fiscal 2018, CPPIB has now contributed $150.1 billion in cumulative net income to the Fund after all CPPIB costs. Since CPPIB’s inception in 1999, it has contributed $215.6 billion on a net basis.

“While strong annual results are encouraging, we maintain a long-term perspective,” added Mr. Machin. “We fully expect that one year in 10, the value of the Fund will drop by at least 12.5%. The long-term investment horizon of the Fund means that we are well prepared to withstand short-term market declines in order to maximize long-term returns.”

“While periodic economic stress affecting global markets will place downward pressure on the Fund, our portfolio is designed to be resilient over longer periods and weather the ups and downs of multiple market cycles,” added Mr. Machin. “Through our investment programs, global footprint and top talent, we are helping to ensure that the CPP will be there for people who aren’t even born yet.”

In the most recent triennial review released in September 2016, the Chief Actuary of Canada reaffirmed that, as at December 31, 2015, the CPP remains sustainable at the current contribution rate of 9.9% throughout the forward-looking 75-year period covered by the actuarial report. The Chief Actuary’s projections are based on the assumption that the Fund’s prospective real rate of return, which takes into account the impact of inflation, will average 3.9% over the 75-year period.

The Chief Actuary’s report confirmed that the Fund’s performance was ahead of projections for the 2013-2015 period as investment income was 248%, or $70 billion, higher than anticipated.

Relative Performance against the Reference Portfolio

CPPIB also measures its performance against a market-based benchmark, the Reference Portfolio, representing a passive portfolio of public market indexes that reflect the level of long-term total risk that we believe is appropriate for the Fund.

CPPIB also measures its performance against a market-based benchmark, the Reference Portfolio, representing a passive portfolio of public market indexes that reflect the level of long-term total risk that we believe is appropriate for the Fund.

The Investment Portfolio grows not only through the value added in single years but also through the compounding effect of continuous reinvestment of gains (or losses). We calculate compounded dollar value-added as the total net dollars CPPIB has added to the long-term Investment Portfolio through all sources of active management, above Reference Portfolio returns alone. CPPIB has generated $19.3 billion of compounded dollar value-added, after all costs, since the inception of active management at April 1, 2006.

“Our active management strategy has added nearly $20 billion to the Fund since the start of the active management program in 2006, and created a more resilient portfolio by taking advantage of our comparative advantages,” said Mr. Machin. “Strong relative returns this year is certainly good to see, but we expect significant swings in performance relative to this benchmark in any single year because of our deliberate choice to build a prudently diversified portfolio beyond just public equities and bonds.”
Managing CPPIB Costs

CPPIB is committed to maintaining cost discipline. This fiscal year operating expense ratio is lower than both the fiscal 2016 and 2015 ratios, and remained relatively flat compared to fiscal 2017. Importantly, our focus continues to be creating a global platform that will deliver value-building growth over the long term, after all costs.

To generate the $36.7 billion of net income from operations after all costs, CPPIB incurred costs of $3,192 million for fiscal 2018, compared to $2,834 million for the previous year. CPPIB costs for fiscal 2018 consisted of $1,053 million, or 31.5 basis points, of operating expenses; $1,029 million in management fees and $709 million in performance fees paid to external managers; and $401 million of transaction costs. CPPIB reports on these distinct cost categories, as each is materially different in purpose, substance and variability. We report the net investment income that our investment departments generate after deducting these fees and costs. We then report on total Fund performance net of these fees and costs, as well as CPPIB’s overall operating expenses.

Investment management fees increased primarily due to the strong returns generated by our external managers resulting in higher performance fees paid as well as the continued growth in the level of assets and commitments with external managers.

Transaction costs decreased by $46 million compared to the prior year. Transaction costs vary from year to year as they are directly correlated to the number, size and complexity of our investing activities in any given period.

Portfolio performance by asset class is included in the table below.

A more detailed breakdown of performance by investment department is included in the CPPIB Annual Report for fiscal 2018, which is available at www.cppib.com. 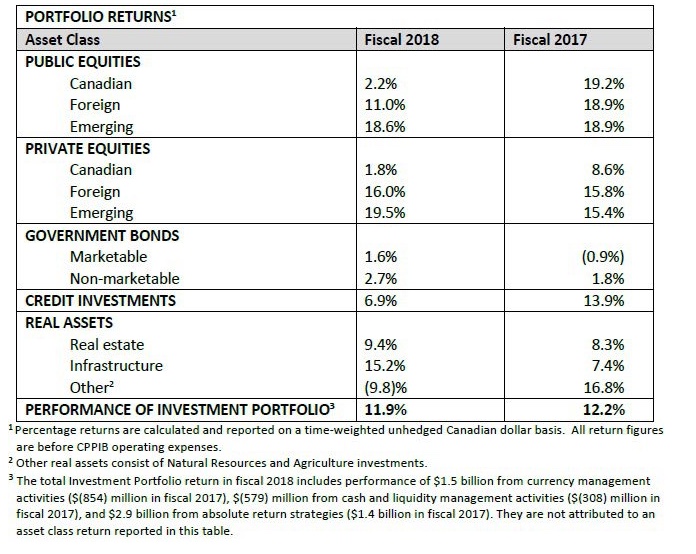 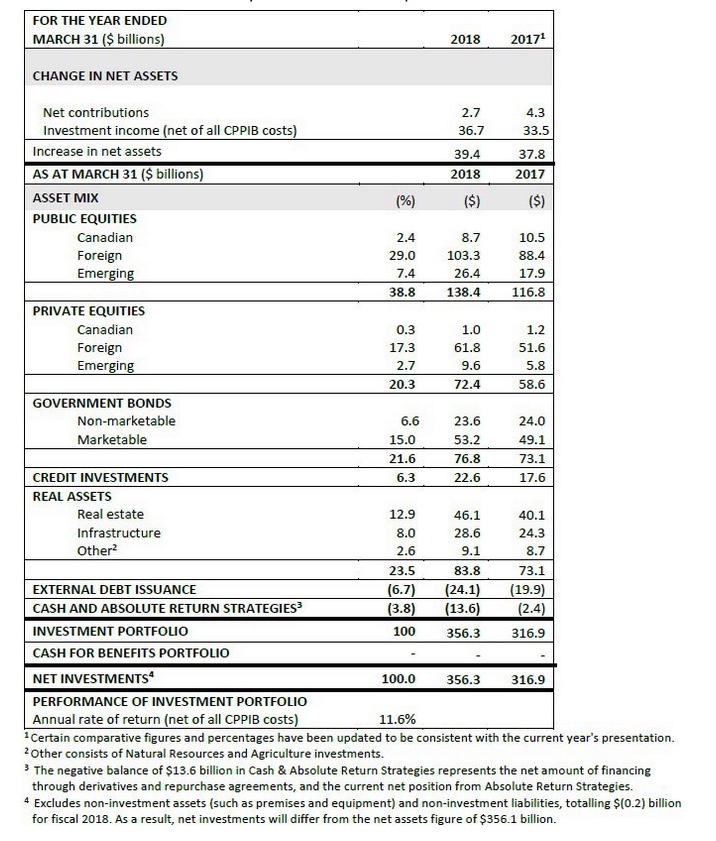 Highlights for the year include:

Invested a further €200 million in Elis SA (Elis), a market leader in the industrial laundry, textile rental, and hygiene and well-being industry in Europe and Latin America, to help fund its transformational acquisition of Berendsen. Combined with additional open market purchases, CPPIB’s ownership stake in Elis is now approximately 9%.

Committed US$380 million to a newly formed fund managed by Enfoca through a direct secondary transaction. The fund will focus on investing in Peruvian mid-market companies. CPPIB led the transaction with Goldman Sachs Asset Management LP’s Vintage Funds as co-lead.

Invested US$900 million in the take-private of Calpine Corporation, one of the largest independent power generators in the United States. CPPIB made this investment as part of a consortium comprised of Energy Capital Partners and other investors for US$5.6 billion in cash.

Signed an agreement with Votorantim Energia, the energy subsidiary of Brazil’s Votorantim Group, to form a new joint venture focusing on investments and developments in the Brazilian power generation sector. The joint venture has initially acquired two operational wind parks in Northeastern Brazil with combined generation capacity of 565 megawatts. As part of the transaction, CPPIB has initially contributed approximately R$ 690 million (C$272 million) in equity. The acquisitions are subject to customary closing conditions and regulatory approvals.

Partnered with Alpha Investment Partners Limited (Alpha) and Keppel Data Centres Holding Pte. Ltd., for an initial allocation of up to US$350 million alongside the Alpha Data Centre Fund (ADCF), with the option to invest another US$150 million. Launched in 2016 by Alpha, ADCF aims to develop a quality portfolio of data centre assets in key data centre hubs across Asia Pacific and Europe.

Invested US$928 million in in the privatization of Parkway, Inc. (Parkway), a Houston-based real estate investment trust, through the acquisition of the company’s outstanding common shares. Parkway owns one of the largest office portfolios in Houston, totalling approximately 8.7 million square feet across four campuses.

Highlights for the year include:

Sold our 18% ownership stake in ista International GmbH, a European heat and water sub-metering company. Net proceeds to CPPIB from the sale were €659 million. CPPIB acquired its ownership interest in 2013.

Sold our 25% stake in AWAS, a Dublin-based aircraft lessor, to Dubai Aerospace Enterprise. The sale was made alongside Terra Firma. Net proceeds to CPPIB from the sale were US$542 million. CPPIB had been an investor in AWAS since 2006.

Entered into a joint venture partnership with GIC to acquire Kumho Asiana Main Tower, a Grade A office building in Seoul, South Korea, from Kumho Asiana Group, parent of Asiana Airlines, for KRW418 billion (US$380 million). CPPIB and GIC will each own a 50% stake in this landmark property, which is located in Seoul’s Central Business District.

Acquired a US$400 million interest in a US$3.3 billion A-note secured by a Class-A office building located in the Central Business District of Hong Kong.

Signed an agreement to acquire a portfolio of six Canadian operating wind and solar power projects from NextEra Energy Partners, LP for C$741 million, inclusive of working capital and subject to customary adjustments. The transaction is subject to customary regulatory approvals and closing conditions.

Following fiscal year end, Scott Lawrence was appointed as Managing Director, Head of Infrastructure. Scott was previously Head of Fundamental Equities and takes over the Infrastructure role following the departure of Cressida Hogg who had led the group since 2014.

CPPIB Capital Inc. (CPPIB Capital), a wholly owned subsidiary of CPPIB, completed five international debt offerings, totalling US$3.5 billion and €3.0 billion, ranging in tenor from 21 months to 15 years. CPPIB utilizes a conservative amount of short- and medium-term debt as one of several tools to manage our investment operations. Debt issuance gives CPPIB flexibility to fund investments that may not match our contribution cycle. Net proceeds from the private placements will be used by CPPIB for general corporate purposes.

About Canada Pension Plan Investment Board

Canada Pension Plan Investment Board (CPPIB) is a professional investment management organization that invests the funds not needed by the Canada Pension Plan (CPP) to pay current benefits on behalf of 20 million contributors and beneficiaries. In order to build a diversified portfolio of CPP assets, CPPIB invests in public equities, private equities, real estate, infrastructure and fixed income instruments. Headquartered in Toronto, with offices in Hong Kong, London, Luxembourg, Mumbai, New York City, São Paulo and Sydney, CPPIB is governed and managed independently of the Canada Pension Plan and at arm’s length from governments. At March 31, 2018, the CPP Fund totalled $356.1 billion. For more information about CPPIB, please visit www.cppib.com or follow us on LinkedIn, Facebook or Twitter.

All figures in Canadian dollars unless otherwise noted.