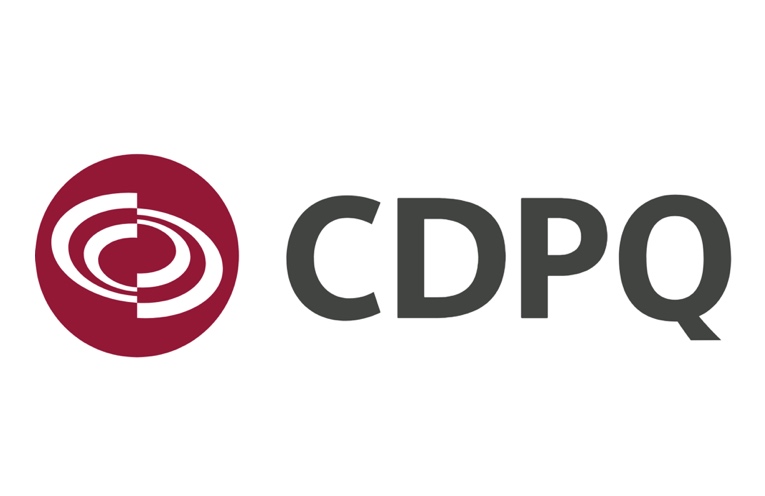 CDPQ Private Equity completed over $7.6 billion in transactions internationally in 2017. Some high-profile transactions include the acquisition, alongside European leader SUEZ, of GE Water, a company that is well positioned to address the growing concerns related to industrial waste water and its environmental impact. CDPQ also invested in Sebia, a company that provides some of the most advanced medical diagnosis technology in the world, and in Fives, an engineering group that is making great strides to improve the operational efficiency of industrial companies, including through the more efficient and responsible use of resources.

Caisse de dépôt et placement du Québec today released its financial results for the year ended December 31, 2017. The annualized weighted average return on its clients’ funds is 10.2% over five years and 9.3% in 2017.

For the five-year period, la Caisse’s eight main clients received returns between 11.5% and 8.7%, reflecting their differing investment policies and tolerance for risk. For 2017, their returns were between 10.9% and 8.0%. 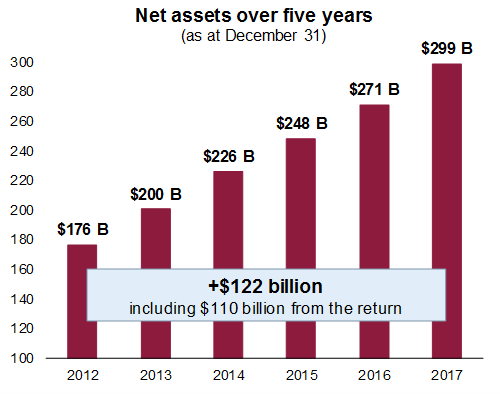 “Over a five-year period, we achieved our objective: a solid return that exceeds both our benchmark and the long-term needs of our clients. The essence of our strategy is to deliver reliable results year after year with the goal of achieving good long-term performance. That’s what occurred in 2017,” said Michael Sabia, President and Chief Executive Officer of la Caisse.

“With $6.7 billion in new investments and commitments, we’ve had an exceptional year in Québec. We’ve completed significant transactions with companies that are successful here and abroad and that generate very strong returns for our clients. We are now partners with over 750 companies, including over 650 SMEs, from the private sector, which is the main driver of the economy,” he added.

“We are facing an unusual environment. Markets are grappling with, on one hand, reasonably solid economic fundamentals, based on synchronized growth worldwide, and on the other hand, investor concerns over how changes in monetary policy to curb inflation will impact interest rates. After years of performance bolstered by central banks, it’s no surprise that the normalization process triggers market reactions like those we have seen recently. This volatility could have materialized at any time in recent months. So we continue building a more resilient portfolio that can withstand market transitions of this kind. All the while, geopolitical risks and tensions related to social inequality persist,” he concluded.

La Caisse’s performance compared against its benchmark portfolio represents $12.2 billion of value added for its clients over the last five years. In 2017, la Caisse’s return is marginally in excess of its benchmark. 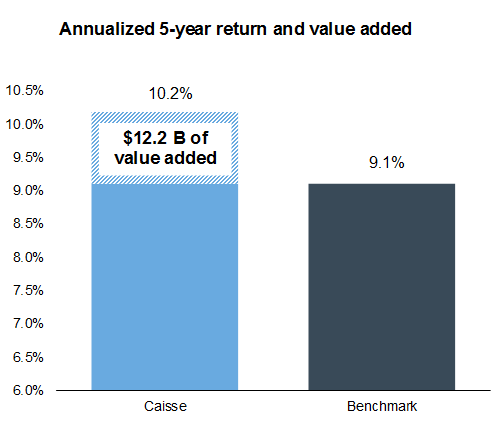 La Caisse focuses on equities that provide stable and predictable returns to reduce sensitivity to market highs and lows. In 2017, la Caisse’s return reflects strong equity market performance, but does not fully capture the surge in multiples for tech companies and companies with an accelerated growth profile. Conversely, la Caisse’s portfolio should also provide greater resilience in volatile markets.

Detailed information on the returns of each asset class is provided in the fact sheets included with this news release.

Exposure to global markets experiencing strong growth
In the last five years, la Caisse has significantly diversified its geographic exposure, expanding its global presence by $105 billion, for a total of over $190 billion invested globally to date. By establishing teams on the ground in the United States, Europe, Asia and Latin America, la Caisse was able to conclude key transactions alongside the most recognized companies and partners in the world. La Caisse more than doubled its exposure in growth markets, which rose from $15 billion in 2012 to over $35 billion at the end of 2017.

Fixed income portfolio profitably repositioned
Starting in 2017, la Caisse repositioned its fixed-income assets, during a period when interest rates remained low despite a recent recovery and bond returns were expected to be modest. Its strategy aims to diversify its activities by reducing its exposure to the traditional bond market and substantially increasing its credit activities in higher-performing market segments, including corporate credit, sovereign credit and specialty finance. This adjusted strategy delivered solid results in terms of both transactions and performance.

Some of the year’s highlights include an increased exposure to growth market bond securities, additional exposure to U.S. corporate credit, and a few high-profile deals including working with GE Capital Aviation Services (GECAS) to create a US$2-billion platform for leasing and financing aircraft.

Leading transactions and partnerships in less-liquid assets
With fierce competition driving up prices for less-liquid assets such as private equity, real estate and infrastructure, la Caisse relies on its comparative advantage to seize the best opportunities available in these market segments. Thanks to its internal research teams, operational experts, network of partners and project development abilities, particularly in real estate, la Caisse makes direct investments using extremely selective criteria, all of which contribute to generating solid long-term returns.

Private Equity
With over $7.6 billion in transactions completed internationally, it was a busy year for private equity in 2017. During the year, la Caisse focused on companies whose activities benefit from underlying economic trends. Some high-profile transactions include the acquisition, alongside European leader SUEZ, of GE Water, a company that is well positioned to address the growing concerns related to industrial waste water and its environmental impact. La Caisse also invested in Sebia, a company that provides some of the most advanced medical diagnosis technology in the world, and in Fives, an engineering group that is making great strides to improve the operational efficiency of industrial companies, including through the more efficient and responsible use of resources.

Real Estate
In 2017, la Caisse’s real estate subsidiary, Ivanhoé Cambridge, was especially active in the logistics and light industrial sector, which is benefiting from the remarkable global growth in e-commerce. It acquired Evergreen Industrial Properties in the United States and strengthened its partnership with LOGOS to develop its platform of logistics assets in India, China, Indonesia, Singapore and Australia.

One of Ivanhoé Cambridge’s new projects during the year was the construction of CIBC Square in downtown Toronto. CIBC’s new global headquarters is the largest office complex to be built in Toronto since 1969. In Paris, Ivanhoé Cambridge broke ground on the DUO, towers that are the first private skyscrapers to be built in the city since the Tour Montparnasse. In the residential sector, la Caisse’s real estate subsidiary concluded a US$250 million agreement with Piramal Enterprises Limited, based in India, to develop projects in Mumbai, Delhi, Bangalore, Pune and Chennai. It also invested $1.6 billion in the privatization of Monogram, a company that manages over 12,000 apartments in the United States.

Infrastructure
In the Infrastructure sector, la Caisse acquired a significant stake in eight Mexican wind and solar farms operated by Enel Green Power. The investment was executed through an investment platform created in 2015 with several Mexican partners including the country’s three largest pension funds. It also invested over $390 million in Québec wind energy producer Boralex. Today, with over $16.0 billion in infrastructure around the world, la Caisse has doubled its holdings from five years ago.

High impact projects, initiatives and investments for Québec
La Caisse made substantial progress on its strategy to enhance and maximize its impact in Quebec’s private sector. As at December 31, 2017, la Caisse’s assets in Québec totalled $63.4 billion, of which $42.5 billion were in the private sector, representing a more than 50% increase in private assets over five years.

It was an exceptional year for new investments and commitments, which amounted to $6.7 billion. La Caisse invested close to $2.0 billion in Private Equity, including $395 million in Cogeco Communications, $350 million in Couche-Tard and $200 million in Osisko. In Fixed Income, it lent a total of $2.5 billion, including $1.5 billion to support SNC-Lavalin’s international expansion and $150 million to finance La Capitale’s growth.

Impactful projects
In addition to the Réseau express métropolitain project having reached important milestones in 2017, la Caisse also developed several projects through its real estate subsidiary. As part of its plan for downtown Montréal, Ivanhoé Cambridge completed and inaugurated Maison Manuvie, an ultra-modern 27-story building that complies with high environmental standards and is fully integrated into its urban setting. Ivanhoé Cambridge also made significant renovations to the Fairmont The Queen Elizabeth hotel in addition to investing over $400 million in projects to renovate the Place Ville Marie Esplanade and the Montréal Eaton Centre, the city’s largest shopping destination.

Growth and globalization
For many years now, la Caisse has focused on growing and globalizing Québec companies by offering them access to its international teams and partners in addition to financing. During 2017, it worked with a dozen Québec companies on their acquisitions and global expansion, including Cogeco Communications, Groupe Solmax and Eddyfi Technologies.

Innovation and the next generation
To foster the success of new economy companies, la Caisse invested in a network of cloud data centres, sales and automatic payment platforms and software companies. Additionally, it invested in Real Ventures and Novacap TMT to support Québec companies in the technology and artificial intelligence sectors. La Caisse also announced the creation of a $75-million fund with Desjardins Group to support the growth and development of new financial technology companies.

During the year, la Caisse completed numerous transactions in the renewable energy sector globally. In Canada, it financed the Mont Sainte-Marguerite wind project and Potentia Renewables solar farms, supported the growth of Innergex Renewable Energy Inc., and acquired a stake in Boralex. In the United States, it financed Sunrun, a portfolio of residential solar energy systems, and announced the largest solar panel project on a private multi-family residential complex, on Stuyvesant Town in New York, led by Ivanhoé Cambridge and its partner Blackstone. In Latin America, in addition to its investment in wind and solar farms in Mexico, la Caisse helped finance EPM, a Colombian electricity producer and distributor, to support its completion of the largest-ever renewable energy project in Colombia.

La Caisse was already one of the largest investors in the wind farm industry in North America and Europe, with stakes in Invenergy Renewables and London Array. It was also present in the solar industry through its stake in Azure Power in India.

FINANCIAL REPORTING
La Caisse’s operating expenses, including external management fees, totalled $622 million in 2017. The expenses ratio was 22 cents per $100 of average net assets, a level that compares favourably to that of its industry. 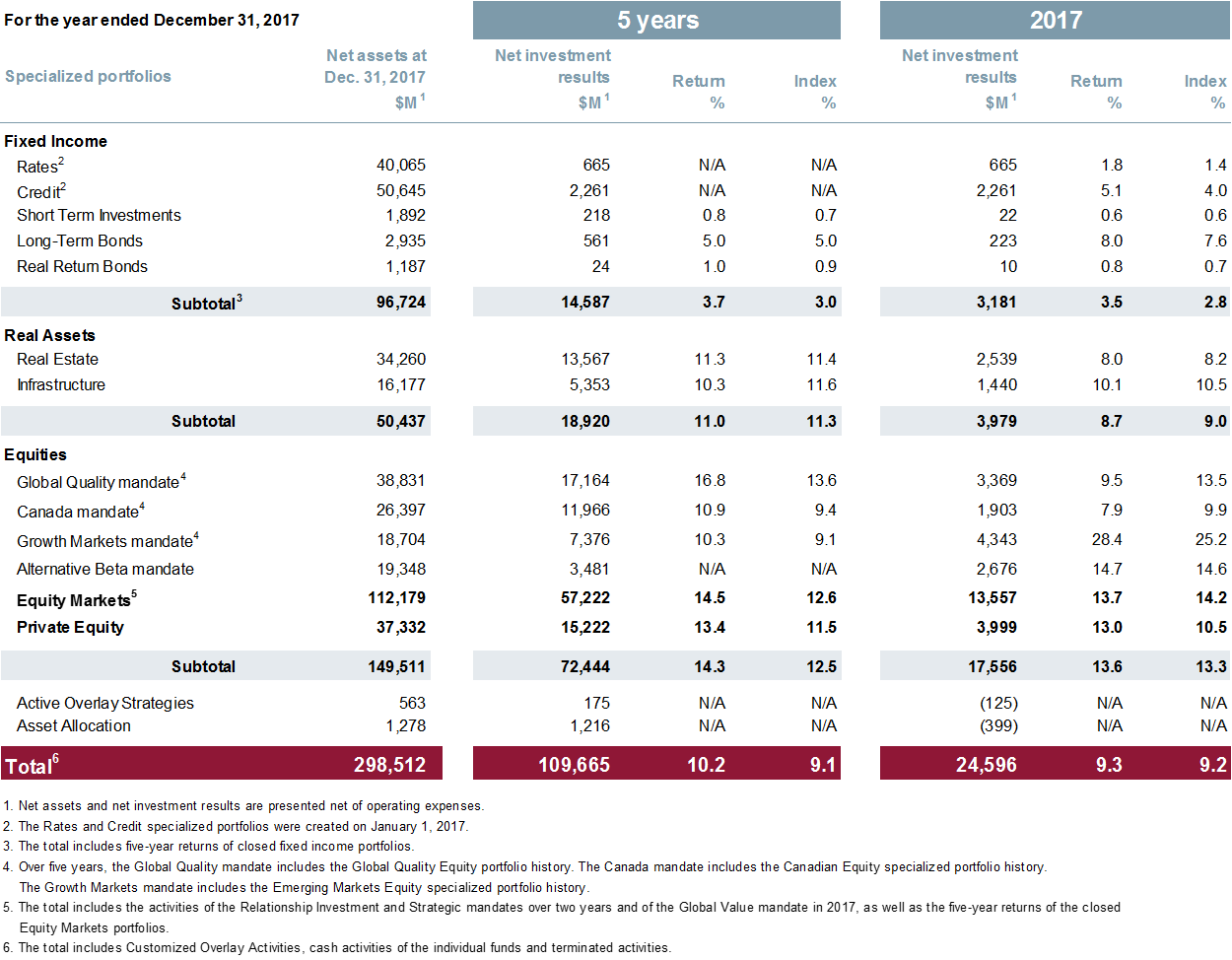