Ivanhoe Mines closes US $616M financing with CITIC and Zijin 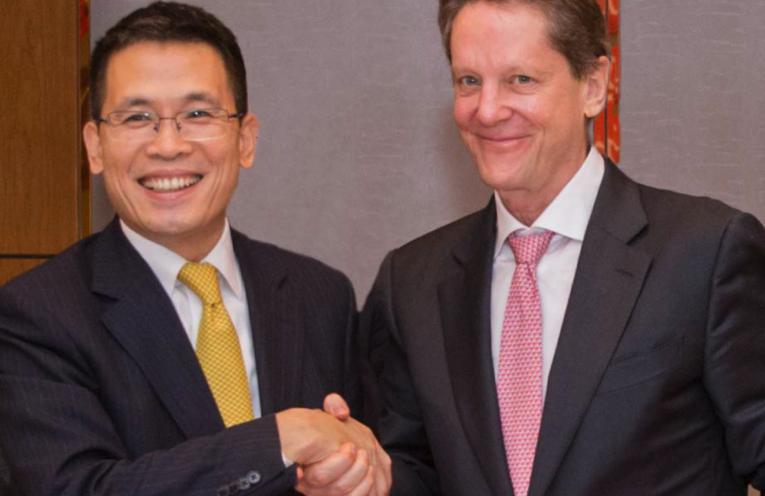 Zijin Mining Group Co., Ltd. (SEHK: 2899), Ivanhoe’s joint-venture partner at the Kamoa-Kakula Project, has exercised its anti-dilution rights, subscribing Ivanhoe shares for $78 million or US $60 million. Zijin will retain a 9.7% ownership stake in Ivanhoe Mines – its level of ownership prior to the completion of CITIC Metal Africa’s strategic investment.

Friedland and CITIC Metal have entered into reciprocal standstill agreements that prevent either of them from increasing their ownership stake in Ivanhoe Mines to more than 19.9% until January 8, 2022. In addition, CITIC Metal and Friedland have entered into a reciprocal disposition and tag-along agreement by which each has agreed not to dispose of any common shares until January 8, 2022 without first offering the other party the right to find a buyer for the shares, except pursuant to Ivanhoe Mines’ board-of-director-approved take-overs or arrangements, non-pre-arranged transfers over the Toronto Stock Exchange, and other limited exceptions.

The investment, initiated three months ago by CITIC Metal, is an integral part of Ivanhoe’s long-term strategic cooperation and investment agreement with CITIC Metal.

Ivanhoe Mines has issued 196,602,037 common shares to CITIC Metal Africa through a private placement at a price of C$3.68 per share.

CITIC Metal Africa now has become Ivanhoe Mines’ largest single shareholder through its acquired ownership of approximately 19.5% of the company’s issued and outstanding common shares. Mr. Friedland has the second-largest Ivanhoe shareholding, with an ownership stake of approximately 17%.

As part of the private-placement agreement, CITIC Metal Africa and Mr. Friedland have signed reciprocal standstill agreements that prevent either of them from increasing their individual ownerships in Ivanhoe Mines to more than 19.9% until January 8, 2022.

The investment has generated gross proceeds for Ivanhoe Mines of C$723 million (approximately US$556 million). Approximately C$131 million of the C$723 million owing from the strategic equity investment was used to repay an interim loan of US$100 million that Ivanhoe Mines received on August 9, 2018, from CITIC Metal’s corporate parent, CITIC Metal Group Limited. This resulted in a net cash payment to Ivanhoe today of C$592 million (approximately US$455 million). The full repayment of the interim loan eliminates the limited-recourse guarantee and share pledge previously provided by Mr. Friedland to secure Ivanhoe Mines’ obligation under the loan facility.

“For more than 15 years, we have been mutually building the foundation for a long-lasting and trust-based relationship with CITIC,” said Mr. Friedland. “We first formed a strategic alliance with CITIC in 2003 and since then have worked together to deepen our understandings of each other’s values, strategic priorities, and operating and financial capabilities.

“After a period of extensive due diligence and multiple site visits, we are delighted to welcome CITIC Metal Africa as our new, largest shareholder. CITIC’s leaders have reviewed hundreds of mining projects around the world, helping them to fully appreciate the world-scale significance of our three tier-one projects, and the opportunities and challenges that lie ahead as we move forward with our ongoing mine developments and exploration programs.

“We are confident that the CITIC Metal Group has the experience, financial resources – and a shared commitment to our objectives – to greatly assist us as we advance our projects to production, creating value for Ivanhoe’s stakeholders in the Democratic Republic of Congo and South Africa, and our international shareholders.”

Yufeng “Miles” Sun, President of CITIC Metal Group Limited, commented: “For several years, CITIC Metal has been focused on investing in high-quality mining assets with strategic, global partners. We are very pleased to have partnered with Ivanhoe Mines as Ivanhoe’s three world-class assets are among the very best in the mining industry and Mr. Friedland is a respected, long-standing friend of CITIC’s.

“CITIC Metal’s strategic investment in Ivanhoe reflects our strong belief that the long-term prospects for the mining industry are extremely positive, especially given the projected robust future demand for key metals, such as copper, for renewable energy infrastructure and electric vehicles.

“We recognize the professional competence of the Ivanhoe Mines team, and we share their profound understanding and embracing of diverse cultures, which are indispensable factors in successful construction and operation of large-scale mining assets in Africa. We are confident that by working closely with the Ivanhoe Mines team and other existing shareholders and stakeholders, Ivanhoe’s three tier-one projects can be successfully brought into production on schedule,” Mr. Sun added.

Ivanhoe’s joint-venture partner at the Kamoa-Kakula Project, Zijin Mining Group Co., Ltd., has exercised its anti-dilution rights, generating additional proceeds for Ivanhoe of C$78 million (approximately US$60 million). The exercise by Zijin of its anti-dilution rights also was at a price of C$3.68 per share. This has resulted in Zijin retaining a 9.7% ownership stake in Ivanhoe Mines – its level of ownership prior to the completion of CITIC Metal Africa’s strategic investment.

With receipt of the combined proceeds of more than C$800 million from CITIC Metal Africa and Zijin, and the repayment of the interim loan, Ivanhoe now has cash and cash equivalents of approximately C$855 million (US$657 million) – and no significant debt.

Ivanhoe intends to use the funds to continue advancing its development and exploration activities at the Kamoa-Kakula, Platreef and Kipushi projects on their current, accelerated timetables.

“With today’s closing of the private-placement financings with CITIC and Zijin, we have enhanced our strategic cooperation partnership with two of China’s leading mining companies,” said Mr. Friedland.

“Both partners share our expectation that future markets for metals will be influenced by steadily increasing urbanization and demands for cleaner air and water, which require strategic metals, such as nickel, zinc, platinum-group metals and, especially, copper.

“Ivanhoe Mines now is in the extremely advantageous position of having current cash resources of approximately US$657 million. We are confident in our capacity to successfully finance all three of our mine-development projects to production,” Mr. Friedland added.

Mr. So Hon Chun, the controlling shareholder of Crystal River Global Limited, the holder of the 1% interest in the holding company for the Kamoa-Kakula Project with Zijin, previously assisted in connection with Zijin’s initial investment in Ivanhoe Mines. Mr. So has a long-standing relationship with the Ivanhoe group of companies and continues to assist Ivanhoe in the Democratic Republic of Congo.

Pursuant to the terms of the private-placement agreement with CITIC Metal Africa, Ivanhoe Mines has accepted CITIC Metal’s nomination of Mr. Sun and Tadeu Carneiro to the Ivanhoe Mines Board of Directors. The two new appointments expand the Board to 11 members.

About CITIC Metal and CITIC Limited

CITIC Metal Africa Investments and CITIC Metal are affiliates of CITIC Limited. As CITIC Limited’s arm in the business of resources and energy, CITIC Metal specializes in the importation and distribution of copper, zinc, platinum-group metals, niobium products, iron ore, coal and non-ferrous metals; trading of steel products; and investments in metals and mining projects. CITIC Metal’s major mining investments include a 15% ownership in the Las Bambas copper project in Peru and leading a Chinese consortium in acquiring a 15% ownership in the Brazil-based niobium producer CBMM. CITIC Metal Africa is an Investment holding company incorporated in Hong Kong, with its 100% equity interests directly held by CITIC Metal.

CITIC Limited is listed on the Stock Exchange of Hong Kong, where it is a constituent of the Hang Seng Index. CITIC Group Corporation, a Chinese state-owned enterprise, owns 58% of CITIC Limited.

Ivanhoe Mines is a Canadian mining company focused on advancing its three principal projects in Southern Africa: the development of new mines at the Kamoa-Kakula copper discovery in the Democratic Republic of Congo (DRC) and the Platreef platinum-palladium-nickel-copper-gold discovery in South Africa; and the extensive redevelopment and upgrading of the historic Kipushi zinc-copper-germanium-lead mine, also in the DRC.