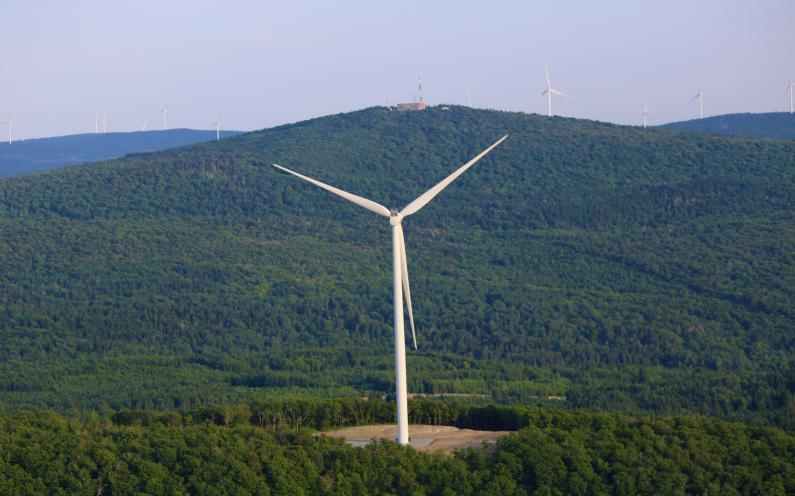 Pattern Energy acquired a 51% interest for a total investment of approximately US $40 million. PSP Investments acquired the remaining 49% interest. Pattern Energy will operate the facility.

“Mont Sainte-Marguerite Wind is an ideal investment from any angle, including everything from its long-term potential, to its locally sourced construction and positive local impact,” said Patrick Samson, Managing Director and Head of Infrastructure Investments, PSP Investments. “We are proud to once again partner with Pattern Energy, to support its continued growth and its ability to increasingly provide renewable energy to clients throughout the world.”

“This is our first wind power facility in Québec and our third project under the joint venture agreement with PSP Investments, underscoring the strategic value of our partnership,” said Mike Garland, CEO of Pattern Energy. “With strong CAFD contributions and a 25-year PPA, Mont Sainte-Marguerite is a fantastic addition to our growing portfolio that expands our Canadian footprint and further diversifies our portfolio. We now have a total of seven operational wind facilities across Canada with a total capacity to power more than 450,000 Canadian homes each year.”

The Mont Sainte-Marguerite Wind facility operates under a 25-year power purchase agreement (PPA) with Hydro-Québec Distribution. Mont Sainte-Marguerite Wind facility is expected to generate enough power for approximately 28,000 Québec homes annually, according to power use statistics from Hydro-Québec. The facility site, located on one of the higher elevations in Southern Québec, has one of the strongest wind resources in the region.

The facility is utilizing 46 Siemens Gamesa 3.2 MW direct drive wind turbines with components made in Canada, including the turbine hubs and towers, which were built in Québec, leveraging the highly-skilled labor force and manufacturing facilities in the province. The turbine hubs were provided by Québec-based Group FabDelta. The turbine blades were manufactured in Ontario and the towers were manufactured by Marmen at the company’s facility in Matane, Québec.

More than 350 skilled workers were employed on site at the peak of construction activity and Mont Sainte-Marguerite Wind has approximately 10 permanent employees for ongoing operations and maintenance, in addition to utilizing a number of local contractors.

Mont Sainte-Marguerite Wind is bringing strong economic benefits to the local community, including more than $775,000 annually to our community partners, the municipalities of Sacré-Coeur-de-Jésus, Saint-Sylvestre and Saint-Séverin, which are stakeholders in the facility and were active participants in its development.

The Public Sector Pension Investment Board (PSP Investments) is one of Canada’s largest pension investment managers with $153 billion of net assets as of March 31, 2018. It manages a diversified global portfolio composed of investments in public financial markets, private equity, real estate, infrastructure, natural resources and private debt. Established in 1999, PSP Investments manages net contributions to the pension funds of the federal Public Service, the Canadian Forces, the Royal Canadian Mounted Police and the Reserve Force. Headquartered in Ottawa, PSP Investments has its principal business office in Montréal and offices in New York and London. For more information, visit investpsp.com or follow us on Twitter and LinkedIn.

Pattern Energy Group Inc. (Pattern Energy) is an independent power company listed on the NASDAQ Global Select Market and Toronto Stock Exchange. Pattern Energy has a portfolio of 24 wind and solar power facilities, including one project it has agreed to sell, with a total owned interest of 2,861 MW in the United States, Canada and Japan that use proven, best-in-class technology. Pattern Energy’s wind and solar power facilities generate stable long-term cash flows in attractive markets and provide a solid foundation for the continued growth of the business. For more information, visit www.patternenergy.com.

This forward looking measure of five-year average annual purchase price multiple of cash available for distribution (CAFD) contribution from the Mont Sainte-Marguerite Wind facility is a non-GAAP measure that cannot be reconciled to net cash provided by operating activities as the most directly comparable GAAP financial measure without unreasonable effort primarily because of the uncertainties involved in estimating forward-looking changes in working capital balances which are added to earnings to arrive at cash provided by operations and subtracted therefrom to arrive at CAFD. A description of the adjustments to determine CAFD can be found on page 62 of Pattern Energy’s 2017 Annual Report on Form 10-K.