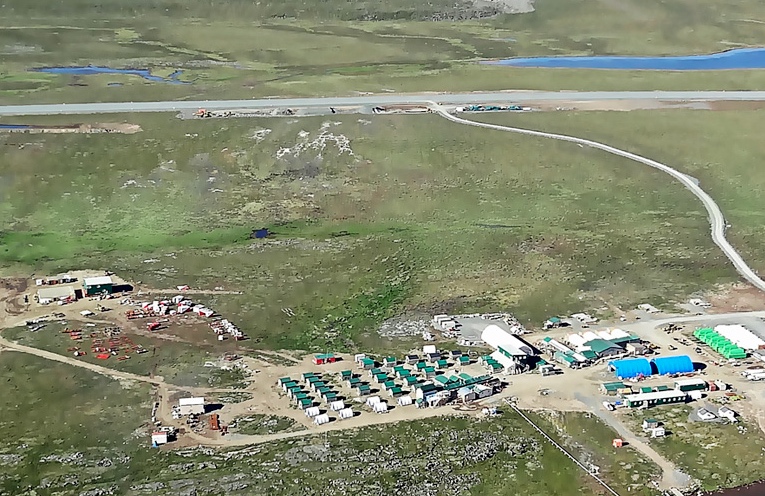 Zhaojin International is a subsidiary of Zhaojin Mining Industry Co. Ltd. (“Zhaojin”), which is a leading Chinese gold producer and one of China’s largest gold smelting companies.

“We are pleased to welcome Zhaojin as a new shareholder to the Company. As experienced gold miners, we also look forward to their technical input as we advance the Back River Gold Project (“Back River” or the “Project”). This investment by Zhaojin is a significant step towards the equity requirements to fund the Project. We are very pleased with our new financial partnership and look forward to advancing Back River towards production.” said Bruce McLeod, President and CEO.

Additionally, the Company plans on a significant exploration program to follow up on 2017 successes and to assess new targets. 2018 key exploration objectives are focussed on:
 optimizing and expanding the Vault zone;
 continuing to define the continuity and extension at Llama;
 continuing to drill test the concept of the deeper iron formation at Llama and Umwelt;
 continuing Echo step out drilling and scoping of resource expansion potential;
 testing the Goose Main Trend extension; and
 developing drilling approach for targets on the George and Boulder claim blocks.

The Company plans to mobilize crews and equipment for the 2018 winter exploration campaign at the end of February 2018. Activities and budgets for 2018 will be announced mid-February 2018.

In connection with the financing, Sprott Asia acted as advisor on the transaction, BMO Capital Markets acted as financial advisor and Gowling WLG was retained as legal advisor for Sabina.

Zhaojin International Mining Co., Ltd. is a subsidiary of Zhaojin Mining Industry Co. Ltd., which is a leading Chinese gold producer and one of China’s largest gold smelting companies. They operate across the full production chain, integrating exploration, mining, mineral processing, smelting and marketing. With more than 60 years of gold mining operations they are one of the world’s lowest cost producers. Since its listing on the Hong Kong Stock Exchange in 2006, Zhaojin has grown into one of China’s largest gold miners with annual gold production of 655k ounces of gold per year and reserves of 13.6 million ounces of gold. Currently they are working on developing the world’s largest single ore body gold deposit, the Haiyu deposit in East Asia.

Zhaojin’s plans are to double their production base within the next five to ten years through investments in international operations.

Sabina released a Feasibility Study on its 100% owned Back River Gold Project which presents a project that has been designed on a fit-for purpose basis, with the potential to produce ~200,000 ounces a year for ~11 years with a rapid payback of 2.9 years (see “Technical Report for the Initial Project Feasibility Study on the Back River Gold Property, Nunavut, Canada” dated October 28, 2015) (the “Study”). At a US$1,150 gold price and a 0.80 (US$:C$) exchange rate, the Study delivers a potential after tax internal rate of return of approximately 24.2% with an initial CAPEX of $415 million.

The Project received its final Project Certificate on December 19, 2017. The Project is now in the final regulatory and licensing phase.

The Company now has approximately C$93 million in cash and equivalents.

All news releases and further information can be found on the Company’s website at www.sabinagoldsilver.com or on SEDAR at www.sedar.com. All technical reports have been filed on www.sedar.com